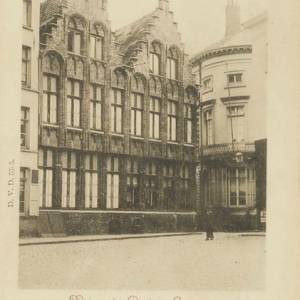 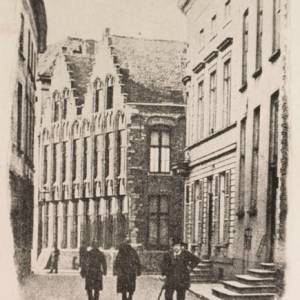 The initial name of the house is Huis den Struys, built in a gothic style. There are only 78 houses in the gothic style in bruges, and generally speaking the gothic houses are le oldest in town.

Built on the « Biskajer » square or Biskajersplein, this square was named after the two merchants from Biscaye in the northern Spain who came to Bruges in 1494 These two houses where converted into their nation house around 1512. Antonius Sanderus called it the domus Cantabrica. It remained largely intact until 1837. The nearby Kraanrei was not yet vaulted and was then still called the Corte Spegel Reye, the waterway to the Waterhalle.

Because of the close presence of the national houses of Castile and Navarre, the district has also been called the Spanish Quarter.

They were engaged in trade with spanish goods and during this golden age most of the goods in Europe were transferred in Bruges.

Printer and publisher Goltzius met Marcus Laurinus Jr. Through Abraham Ortelius. Laurinus, himself a great coin collector, intended to write a book on the history of Antiquity (Greece and Rome) with coins as historical sources and illustrative material. In 1558, Goltzius and Marcus Laurinus agreed to publish a series of nine books.

Goltzius came to live in Bruges biskajersplein 6 with his family, but immediately went on a trip financed by Laurinus for two years, during which he visited no fewer than 978 coin cabinets. He returned to Bruges with a wealth of information and drawings. To ensure that the works could be completed in the best possible conditions, Laurinus set up a printing company, which Goltzius took over as management. From 1563 to 1566 a number of books were printed, both by the authors Laurinus – Goltzius and by humanists who were friends. For example, by Jacob Reyvaert, a student of Jan Geldrius, four works were published between 1563 and 1565, one of which was dedicated to Marcus Laurinus, namely Ad leges duodecim tabularum liber singularis (1563). In Goltzius’ work Iulius Caesar sive Historiae Imperatorum Caesarumque Romanorum (1563) Reyvaert wrote two Latin verses and Jan Geldrius, teacher of the Latin language, an epigram ‘ad Romam’. A long pause followed, during which Goltzius traveled around Germany. Not until 1574 would another book be published. In 1576 the printing works closed for good. Goltzius had another Thesaurus rei antiquariae printed at Plantin in 1579. 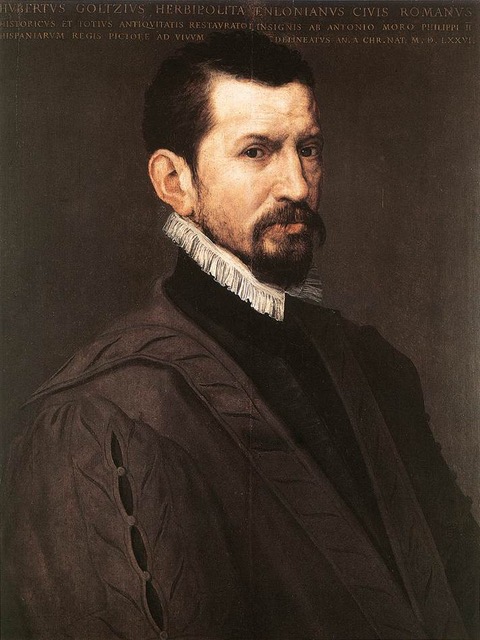 He was the Venerable of the only Lodge in Bruges under the Dutch regime, La Réunion des Amis du Nord.

After defending his thesis in front of the Faculty of Medicine of Paris and brilliantly served in the Guard of Honor of the Emperor under the orders of Baron Larrey (1766-1842), the chief surgeon of the medical services of the Grande Armée, comes settle in Bruges, Biskaijersplein, 6.

As a forensic pathologist, professor of the School of Medicine and responsible for Saint-Jean Hospital, as well as several houses of god, he is one of the notables of a city where everyone knows each other. Constantine reveals himself as a fine scholar in love with French culture and an admirer of Napoleon.

In 1821, he married Louise Wieland, a collateral descendant of Christoph Martin Wieland (1733-1813), nicknamed « the German Voltaire » [ref. desired], translator of Shakespeare and author of the Oberon, from which the last opera by Carl Maria von Weber (1786-1826) is taken.

On July 9, 1829, he organized the « Banquet of the Infamous » in opposition to the King of the Netherlands and his system of government.

He took an active part in the Belgian Revolution of 1830. According to an authentic manuscript, he wrote with Jenneval the second version, both anti-Orange and republican (« The Tree of Liberty » serves as a leitmotif), of La Brabançonne3. It was he who proposed to exclude the Orange-Nassau from the throne of Belgium for life.

The latter evokes it in Excursions in Belgium and On the banks of the Rhine. On behalf of the young independent state, he pursued a brilliant career as a diplomat until his unexpected death in Athens where he was buried opposite the Acropolis. Under his influence, La Réunion des Amis du Nord had financially supported the Greek separatists.

His brother Alexander Rodenbach created the famous brewery RODENBACH together with his other brother and sister.

Georges Rodenbach was born rue des Augustins (missing house) in Tournai. He was baptized at the Sainte-Marie Madeleine church. He is linked, through his mother, to the Baclan and Debonnaire families of the Picardy city. Coming from an aristocratic family of German origin, his father, an official at the Ministry of the Interior, is a verifier of weights and measures; his paternal grandfather, venerable of the only Bruges lodge La Réunion des Amis du Nord, surgeon and deputy, is one of the founders of Belgium; his great-uncle created the Rodenbach brewery. Through his paternal grandmother, he descends from the German romantic poet Christoph Martin Wieland.

Georges Rodenbach spent his childhood in Ghent where his family settled in 1855. He studied brilliantly at the Collège Sainte-Barbe, where he became friends with Émile Verhaeren, and at the law faculty of the University of Ghent. He was then sent by his father to Paris, to complete his studies there, but the young man mainly frequented literary circles there, then he returned to Brussels, where he became the collaborator of the lawyer Edmond Picard.

In 1877, he published his first collection of verses, Le Foyer et les Champs. In 1878, he made a new stay in Paris where he regularly attended the circle of Hydropathes. He will forge his first Parisian relations there: Catulle Mendès, François Coppée, Maurice Barrès …

Leaving the bar in 1881, he devoted himself to literature and contributed to La Flandre libérale and to the first issue of La Jeune Belgique. He published The Elegant Sea. In 1886, La Jeunesse blanche earned him fame not only in Belgium but also in France. It is the first in a series of collections that will form a coherent whole until his untimely death in 1898. White youth simply tells of his Christian childhood in Ghent with the Jesuits of Sainte-Barbe, where he had as a classmate Émile Verhaeren with whom he formed a great friendship that will last all his life, although their respective poems differ completely. The following year, The Book of Jesus shows Jesus returning incognito to earth, probably to Ghent, and everyone ignores him, abandons him. It is the spectacle of this city which is industrializing and where now reign materialist ideologies, money, machinery, with proletarian misery, and the cynicism of the rich. This story ends bitterly. The book of Jesus will not be published until 1923, apart from a few extracts that appeared in the press.

Impetuous host of the review La Jeune Belgique, of which he is the most gifted writer with his childhood friend Émile Verhaeren, he manages to organize a tour in Belgium for the writer Villiers de l’Isle-Adam. Shortly after the latter’s death, he invited his friend Stéphane Mallarmé, who evoked Villiers in Belgian literary circles. Through lectures, Georges Rodenbach also introduces Schopenhauer’s pessimistic thought, which will permeate a large part of his work.

Correspondent for the Journal de Bruxelles, he settled permanently in Paris in 1888, where his novel Bruges-la-Morte (1892), published as a serial in the columns of Figaro from February 4 to 14 and in volume in June, at Flammarion, a masterpiece of symbolism, is very successful. This work, whose central character is the city of Bruges itself, greatly contributes to the reputation of the Flemish city. This is one of the first novels whose illustrations (reproductions of photographs of the city) are an integral part of the narrative device – it is this literary process that André Breton will take up for his story Nadja1. At Le Figaro, he developed a deep intellectual friendship with the anarchizing polemicist Octave Mirbeau, the one who introduced Maurice Maeterlinck to the general public and who was the author of the Journal d’une femme de chambre.

Rodenbach’s work should be compared with that of the Belgian Symbolist painter Fernand Khnopff who, at the time of the publication of Bruges-la-Morte, for which he designed the frontispiece, participated in the Salons Rose + Croix by Sâr Péladan.

Georges Rodenbach binds with Stéphane Mallarmé, and becomes a dazzling conversationalist on Tuesdays in the rue de Rome, with Rémy de Gourmont, Edmond de Goncourt who regularly quotes him in his Journal, Alphonse Daudet, Frédéric Mistral, Joris-Karl Huysmans, the occultist Jules Bois, Auguste Rodin, whom he defends with passion in Le Figaro, etc.

In 1888, the writer married Anna-Maria Urbain, a native of Frameries in Belgian Hainaut, who later became a journalist for the Tribune de Genève. Albert Besnard made a portrait of it in 1897 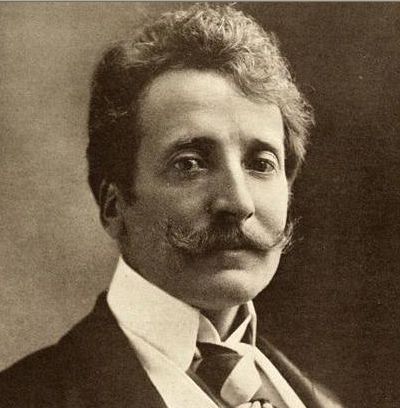 De Meester studied at the Ghent Municipal Academy and started working for a Ghent contractor from 1912. In 1914 he was a war volunteer. After he was badly hurt, he left for the Netherlands and remained active as a draftsman. From 1919 to 1921 he worked for the architect L. Reynhart in Tournai.

In 1921 he moved to Bruges, prompted by his army comrade doctor Louis De Winter, and established himself as an architect. He first rented a house along the Steenhouwersdijk, only to buy a remarkable house on the Biskajersplein after a few years. He married Bertha Virginie Van de Weghe (1890-1974) and they had a son Edmond De Meester (Rotterdam 1917 – Bruges 1997).

He soon gained fame for designing buildings in a style called ‘modernism’. He designed many hospitals, including in Ekeren, Geraardsbergen, Beveren-Waas, Ostend, Beernem, Izegem and De Haan (Zeepreventorium).

In Bruges he designed houses and some remarkable buildings that have since been designated as heritage or protected as a monument.

He was member of the municipal Advisory Commission for Stedeschoon in Bruges and chairman of the Bouwmeesterskring West Flanders member of Rotary Club Brugge.